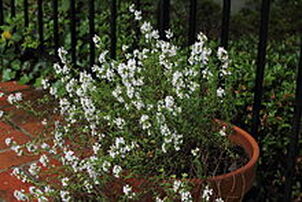 Thyme (/taɪm/) is the herb (dried aerial parts) of some members of the genus Thymus of aromatic perennial evergreen herbs in the mint family Lamiaceae. Thymes are relatives of the oregano genus Origanum. They have culinary, medicinal, and ornamental uses, and the species most commonly cultivated and used for culinary purposes is Thymus vulgaris.
​
The following summary is by healthline.com
Thyme is an herb from the mint family that you probably recognize from your spice set. But it’s so much more than an after-thought ingredient.Its range of use is impressive, and it has over 400 subspecies. Ancient Egyptians used it in their embalming practices, while ancient Greeks used it as incense.Thanks to its distinctive taste, thyme has remained a culinary staple to this day. But thyme is also fast gaining a reputation for its medicinal qualities, such as its ability to help treat acne and high blood pressure
Benefits of thyme by healthline.com
www.healthline.com/health/health-benefits-of-thyme